In the first place I want to thank the Open Society Foundations for their research and report on Muslims in Rotterdam and IDEA for this opportunity to speak to you. I have been reading the report with great interest and I'll present you my findings.

Although much of the general data and conclusions sound familiar - and of course they should! - the report gives an insight in a part of the city and a group of inhabitants, which is striking. To me this report seems to reveal what may be described as a culture of poverty in Feijenoord. This culture of poverty consists in a daily life which is more about survival than about progress, with a social capital that is based on family structures and close friends, and with little cultural capital. Unemployment, poor education and low incomes are of course part of it.

A second remark I should make is about ethnicity and religion. I think this report says more about people of Turkish origin specifically than about our Muslim population in general. In Feijenoord the Turkish community is dominant not only by numbers, but also in terms of social cohesion and selforganisation. The report gives many indications of that. What I read through the facts and figures is the contour of a Turkish community which is much on its own, rather immune against influence from outside and distrustful against local and national authorities.

I shall make two remarks as a bit of nuance: In the first place the networks of this community are certainly helpful for surviving in daily life. And there is a lot of entrepreneurship that is, at least initially, based on family ties. This entrepreneurship offers partly a way out of poverty.
Second remark: the distrust against authorities seems, at least for a part, to be contradicted by the high electoral participation from Turkish side [especially with the municipal elections]. Although Turkish voters mostly vote for Turkish candidates, they at least establish some relationship with the public authorities and local democracy. This of political interest.

Again on the other hand: their is a remarkable attachment to the neigbourhood. Although the inhabitants are often not content with their housing situation, they don't look outside their quarters for better housing. Rotterdam has had a supply system in housing distribution since 1996. And because affordable dwellings can be found all over the city, inhabitants actually widened their searching horizon since then. The overall result is that ethnic segregation in Rotterdam has decreased - as the only big city in the Netherlands. But for the interviewees in this report looking outside does not seem to be an option. Probably they feel to much dependent on their network of neighbours.

Most painful in the facts and figures are the bad scores on health issues. There is in the first place the enormous amount of obesity - indeed a disease that has a lot to do with a culture of poverty. But in the second place there is this figure: no less than 84% of Turkish women complain about diseases and ailments! They complain about health services and docters as well. The docters say many of their diseases are psychosomatic. I would say in common language: these women are unhappy.
I can imagine they are unhappy with their domestic situation and with their small range of choice. I can imagine they feel homesick for the village they left. Among the immigrants probably they have never been the most active ones. And they certainly don't benefit from migration at most. Maybe they are unhappy about the social surveillance and the gossip. And probably their skins are touched by sunlight too little. For these women more contact with others, more opportunities to be significant, more outlook over their narrow borders, would be helpful, I guess. But that is not what we find.

I read in the report a very low participation in the field of voluntary work, or any kind of activism. There is overall little indication, both in the social and in the political sense, of citizenschip. Strikingly, the report tells us over half of the Muslim respondents stated they didn't feel Dutch - Even, they did not want to be seen by others as Dutch. Whatever this may mean exactly - perhaps it differs from one to another - anyway it conflicts with the Dutch nationality that most of them possess. Still more remarkable is the aversion that so many elder Turkish men and women (above 45) show towards learning Dutch. In the interviews they oppose to their being obliged to take a language course.

And indeed last weeks it has been reported that Turkish participants stay away from language courses since a judge has said they are not obliged to attend them, according to Turkish-European agreements. With no obligation they stay away. However, there is also much evidence that older Turkish women, who did learn Dutch, are glad to have done so. They feel less dependent. They don't need to take their children as interpretors to the docter anymore. Nor are they dependent on their husbands for shopping and making social contact. Such examples are not in the report. What is in the report, though, is the huge difference in participation between Turkish and maroccan women on the one hand, and Surinamese and Antillean women on the other.

The latter don't have a better socio-economic status. But they mostly don't suffer from a lack of language knowledge. And perhaps still more important, they don't suffer from patriarchal circumstances. In terms of own initiative, selfesteem and social mobility, Turkish and Moroccan women can learn a lot from their Surinamese and Antillean sisters.

To finish my comments I shall say something about the recommendations of the report. Of course I agree people should be stimulated to report cases of discrimination. This is part of a well-functioning constitutional state. People should not only know their rights but need to feel them to be effectively protected. But this has to be part of a wider scope. And the scope is that of full citizenship. I think that our city government has roughly two ways of stimulating this. The one is consequently addressing all inhabitants as citizens with all their rights and responsibilities. To be a Rotterdammer, to be Dutch, is first and for all a matter of law, it has nothing to do with ethnicity or subjective feelings. It is a secure and firm basis, guaranteed by the constitutional state.

In the case of Feijenoord this may mean: making use of the elected district council members to strengthen the ties of their electorates with public administration and democratic decision making. The other way is helping people to the tools they need in order to fully participate. When I take the above mentioned women as an example: ask the existing organisations of LOV and Vrouwenstudio's (both women's organisations of mixed composition) to reach out to the informal networks of women in Feijenoord. Perhaps they already have such contacts, then I should say: support LOV and Vrouwenstudio's in their work. They will find their ways to other women, even if these are distrusting public authorities.

Ladies and gentlemen, I did not say a word about Islam. I must confess that I am not sorry about that at all. The more you know about real people, called Muslims or what else,about the ways they organise their lives, about their communities and personalities, about their traditions and families, about their own stories and experiences, the more diversity you see and the more individuality you discover. Of course people can tell what for them, in their lives, means Islam. But I don't think it is of any use, I even think it is damaging, to bring masses of people under the collective denominator of Islam.

I thank you for your attention. 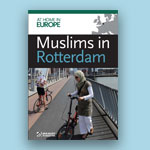 The International Debate Education Association (IDEA) develops, organizes and promotes debate and debate-related activities in communities throughout the world. Established in 1999 to coordinate pilot debate programs initiated by The Open Society Institute, IDEA acts as an independent membership organization of national debate clubs, associations, programs, and individuals who share a common purpose: to promote mutual understanding and democracy globally by supporting discussion and active citizenship locally.